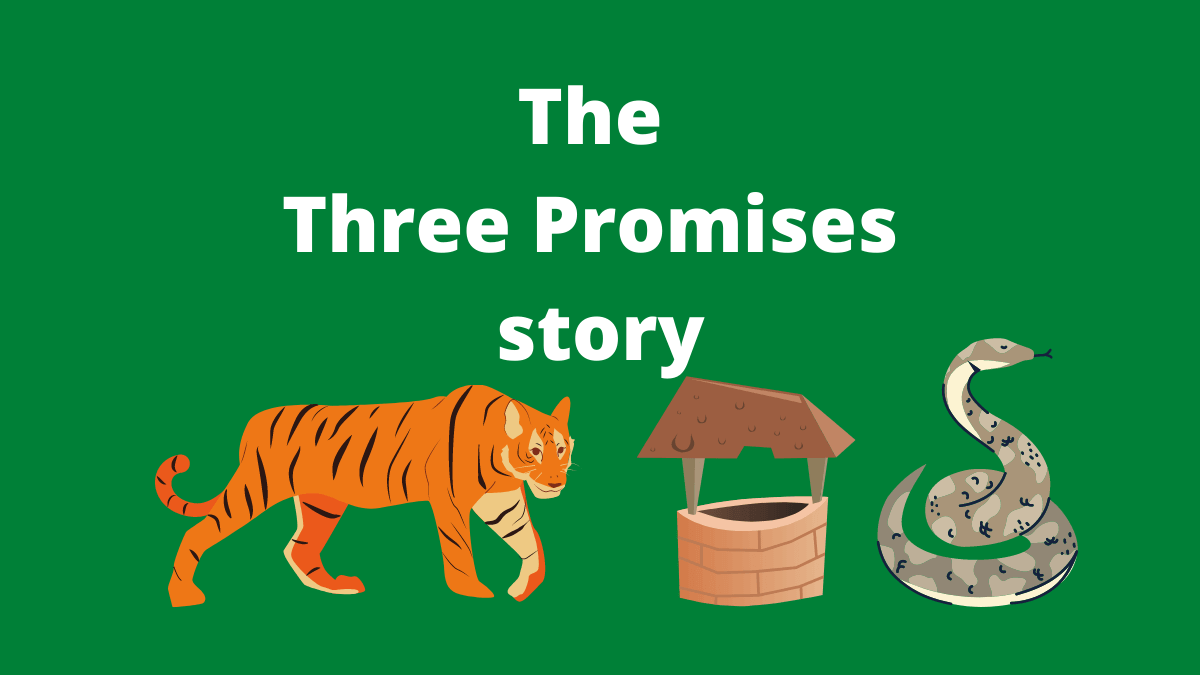 The Three Promises story: Aditya, a young man, was going through a wilderness. He stumbled upon a well. Aditya needed to drink some water since he was thirsty. But he was taken aback when he spotted a tiger, a snake, and a guy trapped within the dry well. Aditya was pleading with all three of them to help them up.

Aditya was terrified. “What if the tiger eats me?” says the narrator. He pondered, “What if the snake bites me?” But the tiger told him that if he saved Aditya, he would not harm him. The snake agreed with a hiss.

The snake was the second creature to emerge. “You are a courageous young guy,” says the narrator. I pledge to be there for you anytime you want assistance. “All you have to do is remember my name,” the snake instructed.

Finally, it was the human’s time. “I appreciate it. Thank you very much, sir. In the capital city, I work as a goldsmith. I swear I’ll always be your friend. If you ever come to town, please pay me a visit.”

Aditya resumed his trek, pleased to have gained new pals. He passed through the same woodland a few years later. Aditya recalled the promise made by the tiger. He made his way to the tiger’s den in the cave.

He was greeted cordially by the tiger. He provided him with fresh woodland fruits and water to drink. The tiger offered Aditya gold jewelry encrusted with valuable stones as he was ready to leave. “Here’s a modest present for you, dear friend.” “I’m hoping you enjoy it.”

Aditya appreciated the present, but he was stumped as to what to do with the decorations. Then he recalled his goldsmith buddy. Aditya would be able to meet the goldsmith and receive gold money from the goldsmith.

Aditya was hailed cordially by the goldsmith(jeweler). He handed him some refreshing lemonade and inquired about his travels. Aditya informed him about his encounter with the tiger and the presents he received. He requested assistance from the goldsmith, who agreed to melt the jewelry and give him gold money.

When the goldsmith saw the decorations, he was taken aback. They were handcrafted by the goldsmith for the king’s younger brother. This is the same younger brother that went missing in the woods a few months back. The monarch had offered a prize to anyone who could help him locate the prince.

The goldsmith, on the other hand, kept his surprise hidden. He reasoned, “If I tell the king that this young guy killed the prince, he would certainly give me the prize.”

The goldsmith requested Aditya to take a break and then proceeded to the palace. The goldsmith claimed to have tracked down the assassin of the king’s younger brother.

To apprehend Aditya, the king despatched troops to the goldsmith’s residence. The monarch refused to listen to Aditya’s version of the tale and imprisoned him.