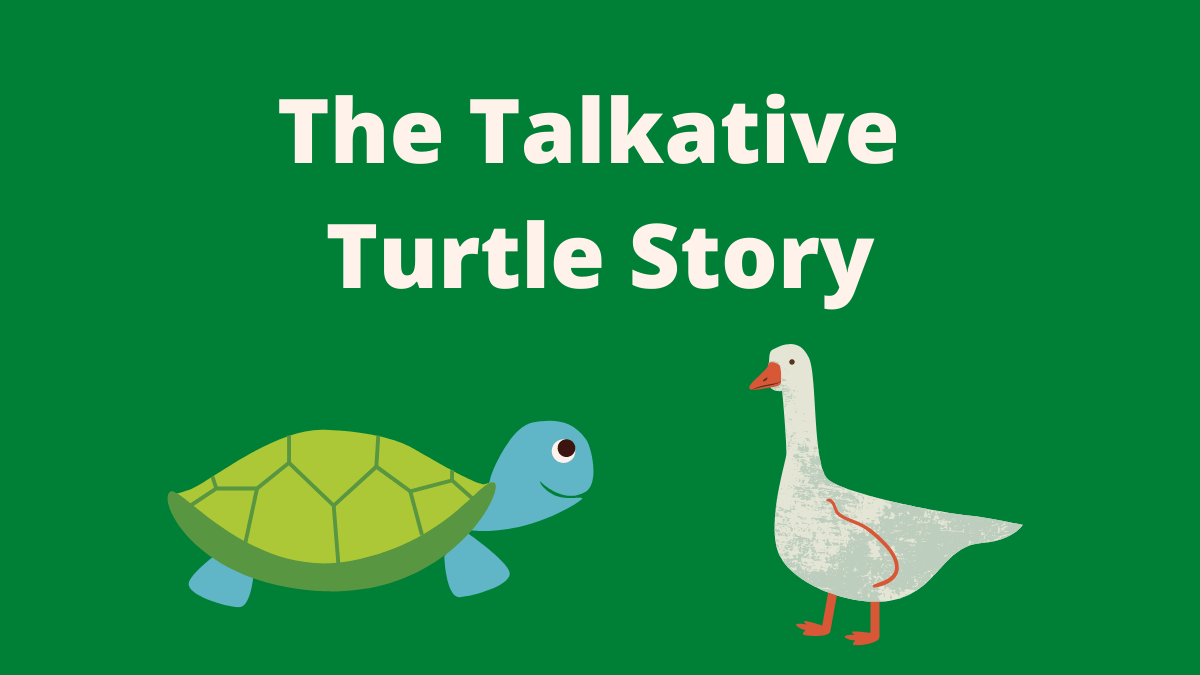 The Talkative Turtle Story: Tom, a chatty turtle, resided in a lake deep within a forest. He could converse with anyone all day, from little insects to massive elephants. Tom, on the other hand, preferred to converse with his greatest pals, a pair of geese named Bo and Mo. The three pals shared a house on the shore of the same lake.

They observed that the lake’s water was dwindling one day. It hadn’t rained throughout the entire year. Many forest animals were fleeing the area in search of water.

Bo and Mo also made the decision to depart. They came to say their goodbyes to Tom with a sorrowful heart.

“However, why are you bidding your goodbyes?” “Without water, there will soon be no fish in the lake,” Tom speculated. “I, too, wish to depart.”

“We’d love to have you along,” Bo said regretfully. “However, you are unable to fly.” “How are you going to join us?”

“Oh, that’s not an issue.” All we need now is a strong piece of wood. You fly while holding the log in your beaks. With my mouth, I’ll hang on to the wood. That way, we’ll all be able to depart together,” Tom explained.

“That’s a wonderful plan,” Mo said, apprehensive. Tom, on the other hand, you are a talker. You can’t open your mouth when we’re in the air.”

“I can remain quiet when it’s crucial,” Tom joked. Let’s get this party started, people! It’ll be a thrilling experience.”

The three pals left the following morning. Tom was ecstatic. He’d spent his entire life on the ground. He could now see mountains from a higher vantage point. Even the towering elephants appeared little from above. He wanted to talk to his pals about it. He kept his tongue quiet, though, since he remembered Mo’s comments.

Soon after, the three flew above a town. The people had previously witnessed geese flying. They had never seen geese flying with a log of wood in their beaks before.
“What is it?” yelled the locals, “Is that a ball they’re carrying?” inquired one.

Another said, “Hey, what would geese do with clothes?”

Tom was perplexed. He wanted to inquire, “What are these peasants blabbering about?”

But as soon as he opened his mouth, he collapsed to the ground. He was knocked out after hitting his head on a rock.

Bo and Mo were standing over Tom as he opened his eyes. “You feel when you opened your mouth even though we had urged you to keep it shut,” Bo said, seeing Tom’s astonishment.

“The people in the village were kind. “They looked for you and then abandoned you by a lake,” Mo explained.

Tom had a peek around. They were near a lovely lake.

The geese questioned Tom, “I think this is a great spot to call home, isn’t it?”

Tom, on the other hand, had learned his lesson. He merely nodded without saying anything.