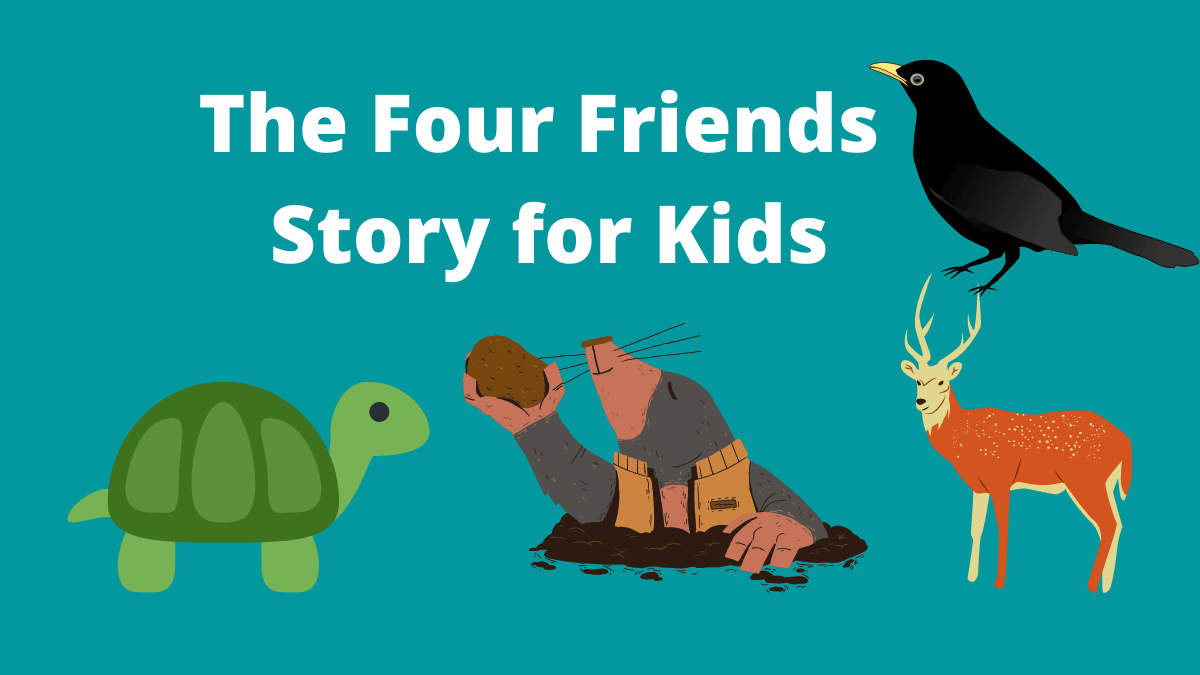 The Four Friends Story for Kids: Deep within a jungle, an odd group of four buddies resided. A deer, a crow, a mole, and a tortoise were the four buddies. Every afternoon, they would meet under a shady banyan tree and converse for hours.

The deer did not appear at the customary time one day. The mole, the tortoise, and the crow were all concerned. “I think you should fly about and see where the deer is,” the mole said to the crow. The crow flew away with a nod of her head.

The deer wasn’t far away, so she didn’t have to travel far. Unfortunately, the deer was caught in a trap set by a cruel hunter! “Hello, friend deer!” “What happened?” shouted the crow.

“Normally, I am extremely careful where I put my step,” the deer groaned. This net, on the other hand, was neatly disguised. I’ve become entrapped. It’ll only be a matter of time till the hunter arrives.”

As she flew away, the crow remarked, “I’ll get some help.” She flew as rapidly as she could to the banyan tree, where the mole and tortoise awaited her. She detailed everything that had occurred.

“Friend tortoise,” the mole replied, “you stay right here while I go with the crow and cut the net our friend is caught in with my keen teeth.”

The crow soon flew to the location where the deer was caught, picking up the mole in her beak.

The deer was overjoyed to see his companions. The mole begins to cut through the net. It took a lot of effort, but the deer was eventually set free. As he slipped out of the net, the deer exclaimed, “Thank you, friend mole!”

“Ah! A voice from the bushes said, “Looks like our friend is free!” The tortoise had taken a leisurely stroll to the location.

The hunter arrived at the same time. The deer bolted away. The crow took off. The mole excavated a tunnel to hide in swiftly. The tortoise, on the other hand, was far too slow.

The hunter was taken aback when he noticed the net had been cut. But then his gaze was drawn to the tortoise, which was moving slowly. As he tied the tortoise up with a rope, he thought to himself, “I lost the deer, but this tortoise would make a great soup.”

“Oh no!” exclaimed the speaker. “We’ve lost contact with one of our friends!” The crow screamed.

“No, there’s still hope,” the mole slowly smiled as he whispered a scheme to his two companions.

The hunter returned to the village with the tortoise on his back. He passed by a lake on his way there. He noticed a deer’s body lying in the grass. A crow was perched on the antlers of the deer, and slowly pecked at his eyes.

The hunter was in awe of his good fortune. “I’ve lost one deer, but it appears that I’ve discovered another!” He thought to himself, “And I don’t even have to kill this one.”

The tortoise gave a friendly grin. His pals had arrived to help him.

The hunter hurried towards the animal, leaving the tortoise on the ground. The mole bolted from the bush and slashed the rope. The turtle was no longer enslaved! The mole said, “Friend tortoise, run!”

He moved really quickly for a tortoise, right to the lake.

Meanwhile, the hunter was close to catching up with the deer. The tortoise was now very safe in the water, as the bird could see. She screamed, “Caw! Caw!” and flew away.

That was the call to action! The buck leaped to his feet and bolted. He had no chance of being caught by the hunter. When he returned, he discovered the tortoise has vanished as well!

Back to the banyan tree, the four companions dashed. The tortoise exclaimed, “Thank you buddies for saving my life!”

“As long as we help each other,” the deer stated with a smile, “no thanks are required.”

We’ll never be in danger!”

These stories for kids in English were written by ava smith. you can check more stories from our site.