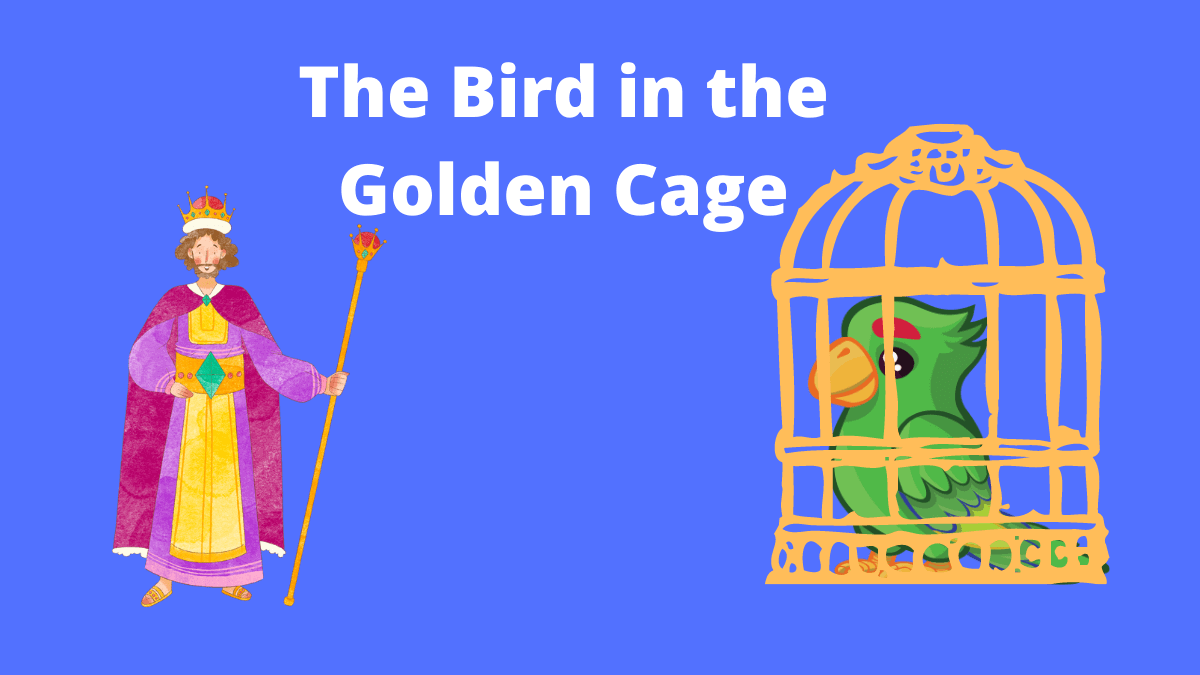 The Bird in the Golden Cage Story: In Persia, a merchant received a gift from a friend. It was a gorgeous golden cage with a green parrot inside. “I brought this talking parrot from India particularly for you.” “Just feed this parrot chilies and listen to its lovely melodies,” the friend advised.

The merchant said one day that he would be traveling to India. “Can you tell me what everyone wants?”

“Bring me that lovely silk fabric,” his wife asked.

“Toys! “I want a toy cart that will accompany me wherever I go,” his daughter expressed her desire.

“How about you, my friend?” the merchant asked the parrot. “What are you looking for?”

“Master, if you find green parrots in India or anywhere else, could you kindly inform them that I am alive and well?” the parrot lamented. Tell them I dwell in a cage in a great house in Persia.”

The merchant agreed to deliver the message and then walked away.

The merchant went to a garden after completing all of his job in India. He happened upon a flock of parrots. “Friend parrots, I bring you a message from one of your sisters,” he said as he approached them. She had become stranded in India. “However, she now resides with me.”

One of the parrots flew over the merchant’s shoulder and landed. “Is that correct?” it asked, adding, “We hope she is safe.”

“Yes!” says the speaker. She is caged in a lovely golden cage. I provide her with delectable cuisine. “She just wanted you to know that she is still alive and well or not,” the shopkeeper explained.

The parrot atop the merchant’s shoulder shuddered and fell to the ground when he heard this. The merchant became concerned and attempted to rouse the parrot. But it remained motionless!

“How did I get here?” “All I wanted to do was pass on a message,” he sobbed. I had no idea this parrot was going to die!”

The merchant got up slowly and walked back to his house.

His wife and daughter greeted him at the entrance. He presented them with the presents he had brought them. He then turned his attention to the parrot.

“Did you tell my friends about the message?” “Did they say something?” enquired the parrot ecstatically.

“I delivered the message as you asked me to. But after listening to it, one of your friends shivered and fell to the ground. I am afraid your friend died. I am very sorry,” said the merchant sadly.

The parrot went still. And then she too shivered and fell. The merchant cried out, “Oh my God! Why is this happening?”

He opened the cage door carefully and gently lifted the parrot out. He felt very sorry for his beloved bird.

He carried the bird outside to bury it in the garden.

He turned to lift the bird after digging the hole. The bird suddenly sat up and flew to a neighboring wall.

The merchant was both surprised and delighted. “Friend parrot, I’m very glad you’re still alive.” “However, what caused you to fall?”

“The parrot that had fallen down wasn’t really dead.” “She was sending me a message,” the parrot smiled, “and the free sky is a million times better than a golden cage.” She also demonstrated how to get out of the cage.”

“Fly away, my friend,” the merchant remarked, “I never realized you were miserable in the cage.” “Let your magnificent song fill the earth.”

The parrot flailed its wings and took flight into the sky.

These stories for kids in English were written by ava smith. you can check more stories from our site.